After recovering from the excitement of Eurovision, I’m now thinking about this coming weekend and The Late Shows. It’s another mega favourite weekend of mine and one of the ultimate culture vulturing weekends across Newcastle and Gateshead on 18th May 7pm-11pm and 19th May 6pm – 11pm.

There is something totally lush about being about to visit venues and spaces in the night time – whilst they treat you to a unique after dark experience. Every year, I get really excited and what’s not to love about a city wide creative and cultural celebration. Each year – people and venues do different things, so whilst you may go every year – you’ll have a brand new experience.

So I’m not one for telling you guys, my fellow Culture Vultures, where you should go to – as the venues and spaces involved this year are all equally as brilliant and part of what I love about Late Shows, is that YOU plan your own cultural adventure or as I often do, simply go with the flow on the night and just enjoy it!

I thought instead, I’d feature this blog post on the unmissable reasons why you MUST not miss Late Shows 2018…..

The Nest by Pop Up Studio Low Fell – Print the Angel. #Angel20

You will be able to chat to Curious Arts about the project and take in this lush large light installation which will be positioned inside Gateshead Millennium Bridge box.

In addition – Curious are offering free creative workshops so you have the opportunity to create your very own light art. 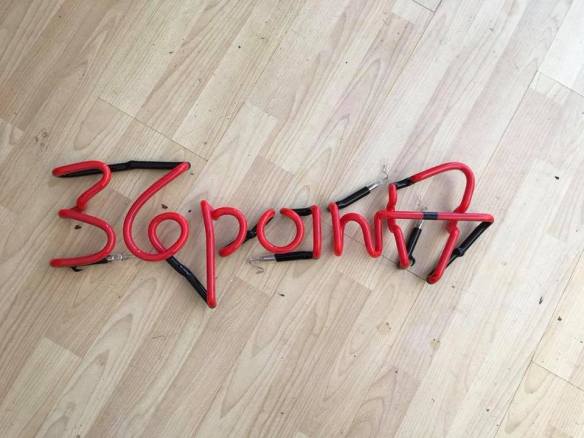 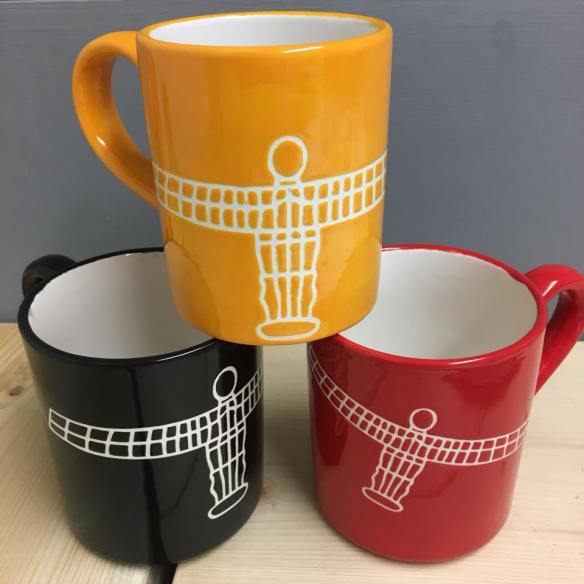 Bliddy heck…what a Late Shows 2018 weekend! I’m excited to get Culture Vulturing and of course, if you see me – say hiyer! I will be live social media-ing, drinking gin (not when working obvs) and having a fantastic lush time.

This weekend is one of my favourite weekends of the year – it’s GIFT Festival. A weekend celebration of regional, National and International theatre right here in Gateshead. It’s a beautiful weekend – full of shows that will excite, make you re-think and question theatre, you’ll laugh so so much, fall in love with stories, feel captivated, you’ll feel awkward, and you’ll be on the best theatre high all weekend and the worst “cant every weekend be like GIFT” festival come down on the Monday.

Across the weekend you’ll experience workshops, discussion, theatre shows, performance, debate, networking and parties – it isn’t a GIFT festival without a lively GIFT end of festival party. GIFT is for the theatre loving and also the traditional theatre rejecting as it’s so much more than going to the theatre.

My first experience of GIFT festival was in 2016 (yep late to the party on that one) – I used to be quite a traditional theatre goer – theatre to me was a “proper” play. But here I am, “pre-culture vulture” era and I’m in the Caedmon Hall watching GIFT two shows – one show was a re-interpretation of “Stand By Me” with the sound track set to Eurythmics’ “Sweet Dreams” (80s obsession fulfilled as always) and then the second was a theatre show by Eggs Collective based on a hen party – with shots for the audience, amazing music, CRISPS and a great script. Well – I bliddy loved it. My love affair with GIFT was born….

Last year again, I attended– GIFT 2017 and I saw many wonderful shows but my absolute highlight was PUG party. An eclectic mix of theatre shorts and scratches in a party atmosphere. Well I was the cat who had the cream – and there was bingo at one point. Loved it!

And like with any GIFT festival – you walk away with new relationships and friendships with people because you become part of a community. A never break able festival community.  And in 2017 – I met megababe Beth O’Doherty (You might remember I wrote a recent post on her) and one of my the wonderful human that is Rosa Rogers Postlethwaite; one of PUG.

Rosa is not only so so talented, ambitious and megababe supportive of other people’s work in the cultural sector – she’s also a fiercely strong character, an advocate, a positive role model and she’s one of the people, who I see in the sector rejecting a whole host of societal conventions and just out there being Rosa, following her path and speaking out for what she believes in….

And that’s what I love about the concept of PUG party – it’s not only the most electric party vibe for the audience, it’s also facilitating creative individualism and a forum to cheer other’s works, voices and be a part of something special.

With GIFT 2018 upon us, I thought I’d take the opportunity to interview Rosa, catch up about her happenings, her upcoming show Composed on Saturday at GIFT in Gateshead (I’m so excited to see it – join me!) and her current theatre residency journey in Gateshead.

Well hello; right so let’s start at the beginning – tell me about your journey into performing arts?

It started with a lot of all singing all dancing shows in my bedroom including a particularly dramatic dance-with-chair to Robbie Williams, “Angels”.

I actually sang in a choir for a few years when I was a teenager, but very un-confidentially, now I sing (and do other stuff) very confidently at PUG with Hannah and Jamie. Which feels amazing.

Most of my performing arts activities happened at school. I then studied Drama at University in London and I became interested in performance from a lot of different angles.

I am interested in making, producing, framing, thinking and talking about and through performance. 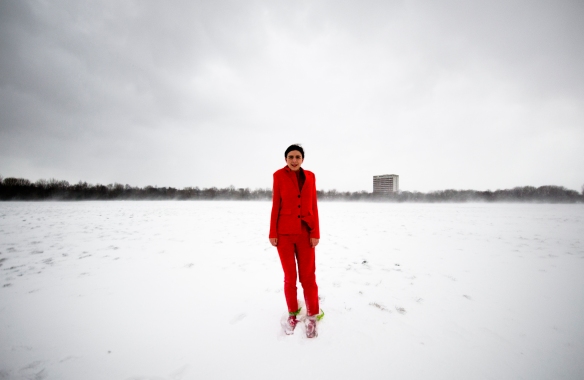 It’s been so lovely to bump into you almost weekly in Gateshead during your current residency at Caedmon Hall – tell me about it?

I’m in the middle of a residency at Caedmon Hall supported by the North East Artist Development Network. I was matched with Caedmon Hall which is a Gateshead Council space and a mentor, Kate Craddock.

This residency is about collaborating with a lighting designer, Michael Morgan, a sound designer Jamie Cook and artist Nicola Singh to develop Composed. I haven’t worked with designers before on a show so it’s been brilliant to have the have the time, kitted out space and financial support to work through ideas and to hear their perspective on the show.

So Composed – your show in development; tell me more?

Composed is a show about theatre rituals, fantasy and institutional violence.

It follows a master of ceremonies through an evening of performance. Only showing the bits of hosting that might happen between acts (and not the “proper” performance). Like a thank you to the sponsors. Or an in-house announcement. Or a list of house rules.

Looking at the role of the MC has been a way of thinking about the relationship between a spokesperson and an institution. It’s about falling into a routine and unpicking behaviour that is seemingly safe. 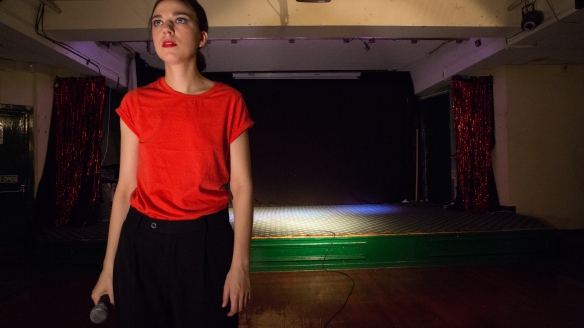 Nail it down to three words….?

I mostly work site-specifically, so with this project, I needed to spend time in theatres to respond to the placeness of it as well as the idea of it. This residency was particularly important because it came with access to tech and money so I was able to learn about what was possible to do with lights and sound and experiment, instead of arriving on the day and making quick decisions.

You’re sharing the show at GIFT on the Saturday night – are you excited?

Yer! I’m really excited. I actually really enjoy performing Composed. I’m excited because I’ve shown lots of it in little bits but some parts are completely new and it will be the first time all these threads will come together.

What do you want audience to take away from it?

I met you last year at GIFT – so for those that don’t know – what’s GIFT all about?

GIFT programmes contemporary theatre and performance and presents it in different venues across Gateshead. The kinds of performances range in form so they might not necessarily happen in an auditorium over the course of an hour or two but some like my show Composed will. GIFT is a festival that invites people to see a lot of different approaches to making live art. And different kinds of experiences with people.

Most importantly, to me, GIFT programmes international artists.

Have you been involved/performed as part of it before? 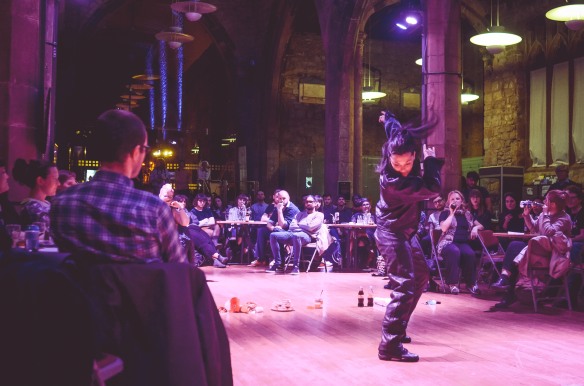 Where did PUG party idea come from?

PUG parties are like any other PUG night… in that it’s a variety show, hosted by us three. And there’s a disco afterwards. But the party means it’s a partnership with another organisation.

I’m Culture Vulturing around GIFT for the whole festival – what are your “must see” recommendations?

Situation with Doppelgänger by Julian Warner and Oliver Zahn/HAUPTAKTION

Though I will be going to everything. I think the line-up is mega this year!

What are the plans for Rosa across this year and the next?

I’m performing at Anatomy Cabaret’s Finest Cuts night at Traverse Theatre, Edinburgh the week after GIFT and at Pulse Festival on 1st June.

I’ve been working as a dramaturg with Lizzie J Klotz on her project Fawn which is part of a triple bill that she’s doing at Dance City, 26th May. I’m very excited to see these three pieces together. It’s going to be a really incredible evening.

The next PUG (number 6!) will be 27th July and there’s an open call for anyone interested in performing (see www.pugnight.co.uk).

This year I’m producing a new show, Five Years written and performed by Neal Pike and directed by Matt Miller with Newcastle and Durham dates in Autumn 2018. 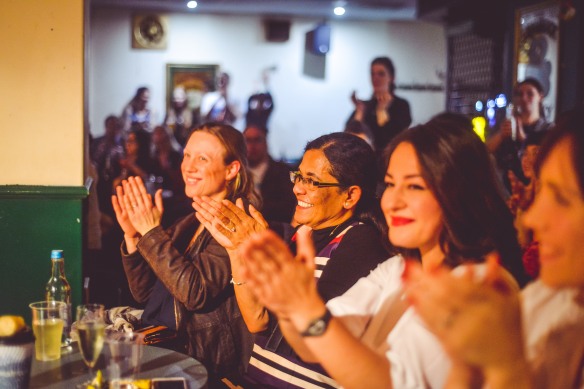 Well yahoo! I’m so excited for GIFT 2018 – tickets are still available for the whole festival. My Culture Vulture recommendation is of course, the WHOLE festival…. But if I had to narrow it down:

And She by Bonnie and the Bonnettes

Someone Loves You Drive with Care – Baltic