Today’s blog interview is with my long-time pal Comedian Si Beckwith a head of his show “Get Lush” on Monday 3rd Feb at The Stand Comedy Club Newcastle. Over the years Si and I have lost touch and reconnected more times than I can count.  We have known each other across several lifetimes and awkward stages of life…..an emo phase, an indie phase, a phase when we were both super skint and ate A LOT of chips from a local chip shop, when I made chain smoking look like an Olympic sport, a time when I hadn’t even discovered gin yet, endless bad haircuts, terrible tattoos (mine), poor choices in music (also mine), controversial choices in top 10 film lists (yep – mine too) ….. 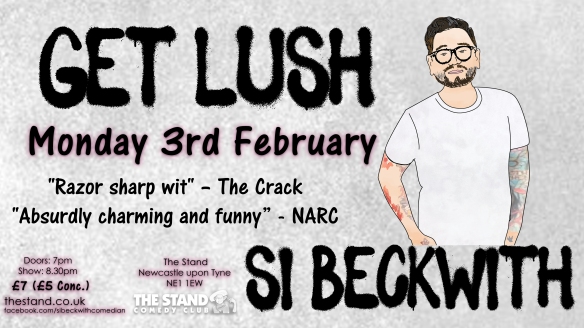 So now we are beyond those awkward stages…(I’ve defs got a bad hair cut or two in me left – I mean WHAT was 2018 Horts hair about?!?!), it’s lush to catch up again and find out more about Si’s upcoming show, why it’s a must see and what 2020 holds.

For my fellow Culture Vultures, who are you?

Gosh, I’d totally forgotten about the word “divvy”, I need to reintroduce that into my life. So, tell us about your journey into stand-up/comedy?

I’d always written; and found that the funny bits were the bits I was enjoying writing most. I’d always watched stand-up too but hadn’t seen loads live – I scoured YouTube for loads of videos of amateur comedians, and it was then that I realised that ‘oh, ANYONE can give this a go.’ I went to an open mic night and booked myself in for a spot a couple of weeks later. I’ve just never stopped since.

We’ve known each other a long time – through MANY bad hair-cuts! What was the tipping point into doing comedy professionally?

We have, and ALL the bad hair cuts. I think at one point I was 30% fringe. The tipping point was just not ever wanting to get a real job again. It’s amazing what not wanting to go back to working in a call centre will do for your work ethic into the creative thing that keeps you away from it. I sort of fell into MCing/compering too as it was something I didn’t expect to be such a cornerstone of what I do, but I love it and get some amazing bookings hosting and it’s opened a lot of doors and certainly pushed me on to being a better act. 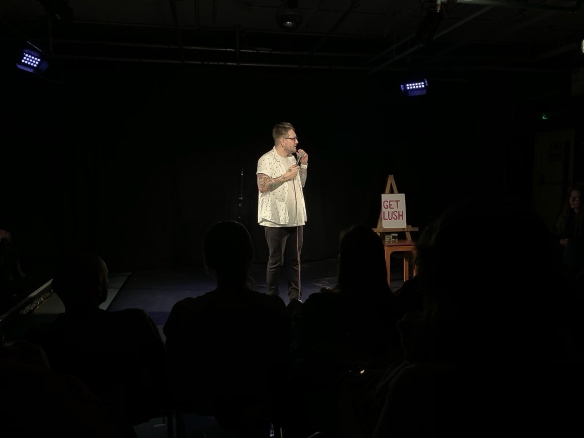 You are a super good host and look so comfortable on a stage. We used to argue quite a lot about our lists of favourite movies, bands, songs etc. so continuing that theme, what’s your top peer North East comedians and why?

Louise Young is one of the most naturally talented people I’ve ever met. I saw her about a year before she’d even did comedy and even longer before we’d even met and became friends; she did a poem at this open mic night that blew me away. She’s such a good joke writer and such a unique mind.

Lee Kyle has a wonderful attitude to comedy and constantly makes interesting things. I like things with a DIY ethic and Lee certainly has that. I think Hal Branson is a properly talented man and always a joy to be on a gig with. I’ve really enjoyed working with Ken McGuinness who is a very new act but writes some properly clever comedy. He’s doing support for this show, alongside Anja Atkinson who is really funny and has just constantly developed as a comic. I could list so many though, the North East has a bunch of really talented comedians.

Onto your show…When and where is “Get Lush” on and what is it about?

It’s at The Stand in Newcastle on Monday 3rd February. It’s a daft show about trying to be a better, failing, but still trying. There’s a lot more in there about being working class than I expected, and some really silly drawings. It’s mostly though, just a show about trying your hardest and why it’s okay to be a bit of a knacker.

What was the inspo behind the show?

‘Get Lush’ has been my New Year’s resolution every year for about 15 years. I’d went for coffee with a mate (Rosa Postlethwaite, who is an excellently talented creative) and I’d mentioned it being my regular resolution to myself. She said it stuck with her, she’d mentioned it to friends, and it was a good thing to hang a show on, (she said it much more eloquently than that) so I did hang a show on it.

Love Rosa! Have you felt January pressure to ‘Get Lush’, with all this New year, new year bobbins?

Not really. I’m comfortable with the fact now that my favourite meal is just TWO meals, so it is what it is.

Second breakfast and second lunch always and forever! So why should people come and see the show?

It’s funny, I’m trying my hardest, there’s a bit about the Jarra March in there and I’m better at drawing than I let on.

How much are tickets and where can I get mine from?

Tickets are £7 (a fiver for concessions and Stand members) and you can get them from The Stand’s website here. 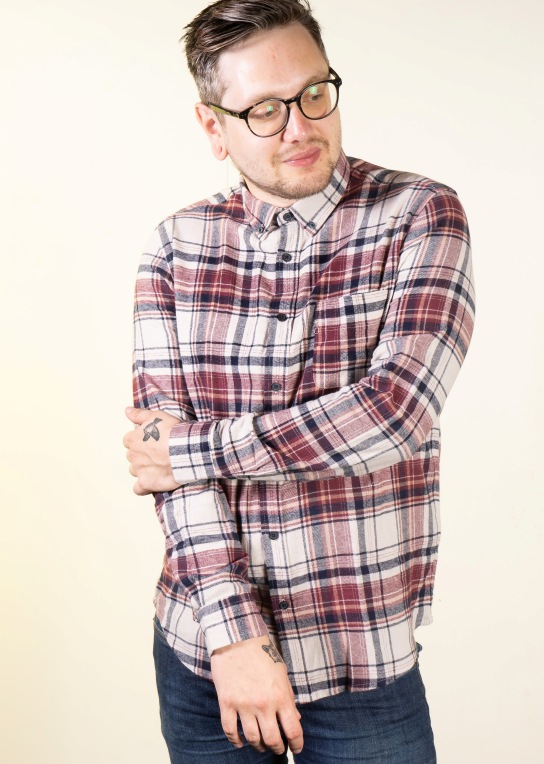 You performed Get Lush before at Alphabetti (or a scratch version) – what were audience responses like?

So, so good. It was just lovely, and most of the audience hung around in the Alphabetti bar after and was great to have such positive, kind words. NARC Magazine reviewed it super positively too, and it gave a good jumping off point for tightening up the show.

And what are the plans after the show – you’re taking it to Edinburgh Fringe?

Have you performed at the Fringe before – what is it like?

I have. I did a two-handed show back in 2013. I’d not been going long when I did that and learnt so much doing it. We did a compilation show too, so doing two shows a day was a big learning curve. It’ll be my first year with a solo show, so that’s really exciting. 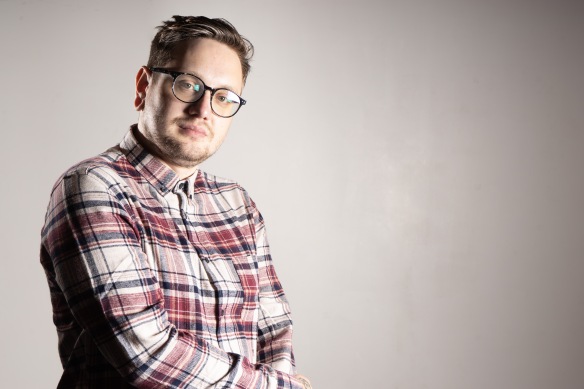 I read “two handed” as tap dancing for some reason (It’s 2am) – would love you to add a bit of tap into the mix. You organise and compare comedy nights alongside your own stand up – can you tell me a bit about that and where we can catch you/a night you’re involved with next?

I do. I run so many now, as I’ve just taken on running comedy at two new amazing venues (all is under wraps a bit at the moment as I wait on a couple of big announcements). The gig I run at The South Causey Inn is amazing though, pretty much all shows have been sell-outs, and the line-ups for next year are UNREAL with Live At The Apollo acts headlining two of the shows, and the bills are just full of some of my favourite funny people. The next one there is Saturday 15th February with Jonny Pelham headlining. We’ve also just started a night at The Bridge Hotel which runs from February and there’s an announcement about that coming very soon too.

Well keep me in the loop – You also run a podcast – can you tell us about that?

I do, it’s me and Ken McGuinness through our Hope For Proles production company. It’s called The Greatest Film You’ve Never Seen. We chat to excellent guests about the best films that they should’ve watched but haven’t. We get to know what it’s like when the film comes into conversation, do they lie and say they’ve seen it? Do they know much about it? Then, and this is the best bit, we get them to describe their own version of the film based on the limited knowledge they have. It’s also, according to my fiancée and fan of the show (I make her listen), a lot of me being a tit and Ken keeping me in check.

Will give it a listen tomorrow – love the concept! So, what’s next for SI in 2020- anything you can share?

Loads. More shows. Lots of gigs. I wanna debut a new show in June (ish) which will be next year’s Fringe show. Got two more podcasts in the pipeline. A play potentially later this year. And there’s some sketch stuff coming soon (alongside the BBC Radio Newcastle Grin Up North stuff) which I am very excited for.

Anything else to close on?

So get your tickets for Get Lush, it will be proper lush. The Stand is a lush venue (they do a lush dinner too) and I will be cackling away in the audience (you’ll hear me from 10miles away). I’m excited to see what comedy shenanigans Si brings to the fore across 2020.